To apply fake lashes and a 3 Second brow

Several weeks ago, my mom bought the “As Seen on TV” and “As Seen All Over Your Facebook Feed Ads” 3 Second Brow. (Again.. not a #sponsor). The 3 Second Brow is essentially an eyebrow shaped stamp that you press into some brown powder and stamp onto your eyebrows. It promises to give you super quick and easy, natural looking brows. When she first told me about it, I was extremely skeptical. All I’ve ever heard about make-up is that it’s good to be careful, take your time and pay attention to detail. Stamping some make-up onto your face in 3 seconds (how they arrived on 3 seconds being the estimated elapsed time.. who knows?) seems antithetical to everything I’ve ever learned and a recipe for disaster. Like me, my mom has very blonde, almost non-existent eyebrows so I know that this purchase was born out of desperation and sheer curiosity. When I first heard about it, I laughed and laughed and laughed imagining what a stamped eyebrow would look like on my face. My mom brilliantly suggested that we try this for my blog and we set a date. She also had the idea to simultaneously experiment with fake lashes, something my mom, sister and I have always wanted to do.

Podcast I Listened To

I did this challenge with my mom and sister, so I didn’t listen to any podcasts. Regardless, I will give a mini-plug for a long expired mini-podcast series called “Mystery Show”. Unfortunately, I don’t think they will ever make more new episodes of this show, but the first 6 episodes are worth a listen. Each week the host endeavors to solve a mystery. From determining Jake Gyllenhaal’s actual height to finding the owner of a missing belt buckle, Starlee Kine gives you a quirky, funny tale of her quests. It was a favorite pod of mine back in the summer of 2015 when I became obsessed with walking and listening to podcasts. 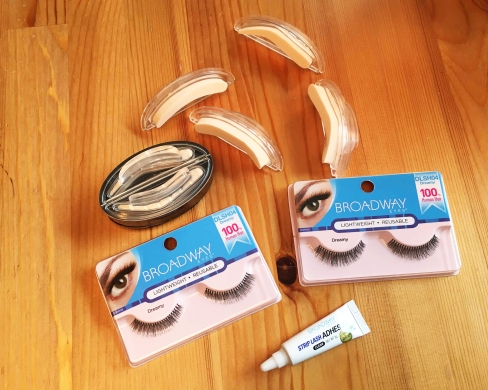 Who is Helping Me

My mom and my sister joined me for this challenge. Of the 3 of us, my sister is the make-up expert. My mom is a close second and I come in dead last. Because I was a tomboy for 20 years, I missed those formative make-up experimentation ages and I’ve had to scramble to catch up. I’ve always been curious if fake lashes and better brows were the missing pieces to my look. I’ve always wondered if I just had lashes I could be 25% more pretty. Just like the “3” seconds it takes for the 3 second brow, I have no idea how I came upon the numerical approximation for my expected increase in prettiness.

Who is NOT Helping Me

It’s more like “WHAT” is not helping me… and that would be my FACE! I apparently have very small eyes that cannot properly fit fake lashes. Please see explanation below.

How I Did It

Also, yes, my fridge calendar says “April” but I promise it’s actually an April, May and June calendar (half erased by little kid hands).

Then it was Kristen’s turn. Because she’s the expert, we let her apply her own brows.

She had great eyebrows to begin with, so the 3 Second Brow enhanced her brows well.

Kristen must have gotten the hang of it by the time my turn came around because my brows turned out way better than Deb’s. Nothing mind-blowing, but better than before.

4. We moved on to fake lashes. Kristen learned from a friend that you should dab some glue on your hand and then run the lashes through the glue lightly. She also said to wait a little bit for the glue to get “tacky” before applying. I think all of us agree that it was harder than we expected to get the lashes on. It took some of us (ie: me) a really long time to get them on.

I decided to do a time lapse video of my eyelash application and I’m really glad I did. It took me an unnaturally long time to get my lashes on. First, I’m unskilled and had a hard time with the dexterity of putting lashes on. Second, I have small eyes and the lashes were too big for me. We ended up having to stop to trim them a few times. Third, we had a funny incident happen during the process that I will describe later. Here’s the video:

Man, this was an extremely frustrating process! Knowing my varied success on many endeavors thus far on my blog, I just kept saying “Of course this won’t work for me!” as I tirelessly tried over and over again to get the lashes to stick to my apparently tiny, odd-shaped eyes. After multiple failed attempts and a desperate intervention from my sister, we decided it was a lost cause. My eyelashes should be left to professionals.

The third obstruction to my eyelash success happened when we lost one of my lashes. After my sister tried helping me put the lash on my right eye, the lash for my left eye went missing. We searched everywhere! Long after we gave up and started cleaning, my sister finally found the lash: 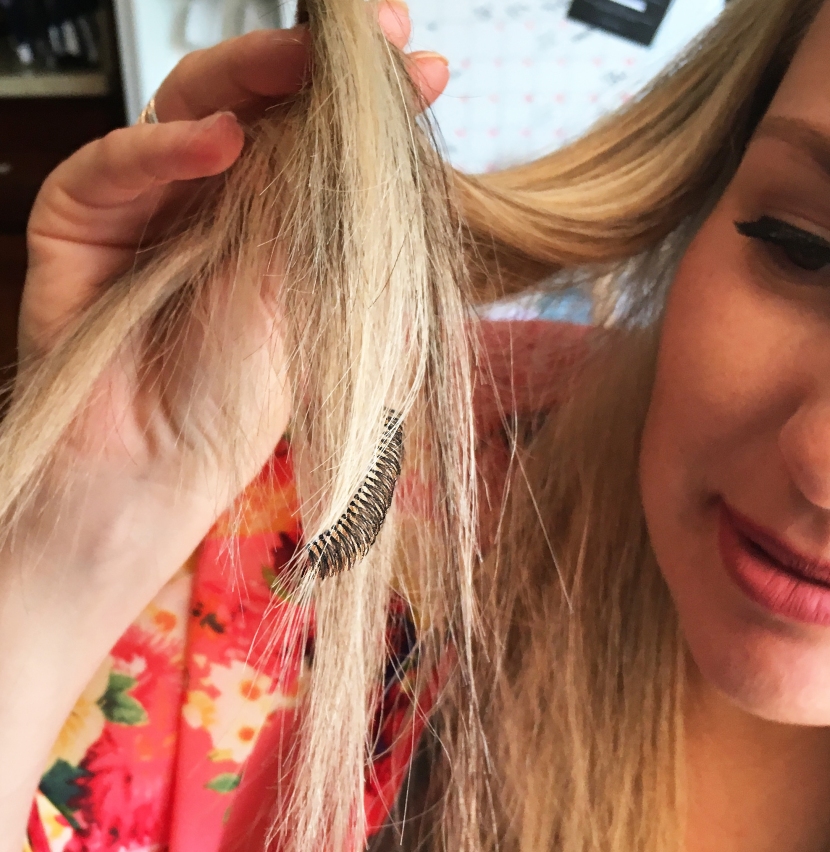 All the while it was stuck in Kristen’s hair!

This incident had us cracking up again. I don’t think we stopped laughing the whole time we did this experiment. My sister and my mom are my best friends and we always have the greatest time together – this time was no exception!

Final Thoughts/Would I Do It Again?: